From only 5.5 million participants in 2014 to over 6.5 million in 2018, flag football programs have been on a steady rise in recent years according to Statista. Along with this increased participation comes an increase in friendly competition.

As a coach or administrator of a flag football program, you may be wondering how you can dominate your competition at any age level while also teaching your young athletes the proper way to play and enjoy the game of football.

Regardless of your goals on the field, learning how to call youth flag football plays successfully is a great place to gain traction as a fun and competitive program.

When it comes to play calling and teaching kids how to play flag football, the first thing you need to teach is the rules of the league your program is registered with. Typically, the flag football rules look a lot like they do in regular youth football with the main exception being rules focused around running plays.

A few important rules to note are:

You can learn more about the typical rulebook at NFL Flag Football or on our blog.

The most important part about creating a flag football play calling system is knowing your team and keeping your play calling appropriate for your teams age level. On the middle school level, some of your players may understand simple flag football plays such as “Spread Right Fills Left” whereas at a younger level, you should likely be calling plays like “Bobby is the QB, you hand it off to Jordan and you run it to the right side”. Remember, it’s best run easy flag football plays so everybody on the field understands and can run the play effectively.

USA Football recommends that you pick a few good flag football plays that your team knows and can run very well rather than implementing an entire playbook. Knowing what your team can do best can be a major key to success in your league.

A good place to start digging into some offensive flag football plays is by starting with the passing game with spreads, trips and stacks. Along with using some of these formations, by changing your flag football passing routes you can help keep the opposing team constantly on their heels. Just be sure to keep in mind that while some regular youth football plays may work, you may need to change a few things first.

Spreads are a great play to call when you want to spread the defense out, hence the name. You can either call spread plays to the right or left and typically the formation has two receivers to the side you call and one to the opposite side. An example of a spread play would be “Spread Right, Slant Under Right. Drawn up the play looks something like this: 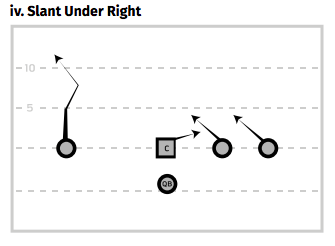 Trip plays are when all three receivers line up on the same side of the field. These plays can be a great way to confuse defenses with the direction of the routes the receivers run. Like spreads, trip plays can be called to the left or right side. An example of a trips play is “Trips Right, Boise”. Drawn up, the play looks like: 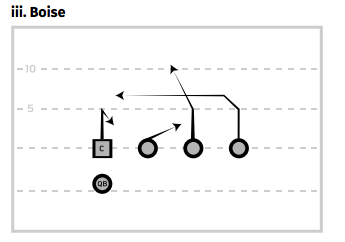 Stack plays get their name from the idea that one receiver lines up behind another on the side called, and the third receiver lines up on the opposite side. An example of a stack play would be “Stack Left, 45 Degrees”. Drawn up, the play looks like: 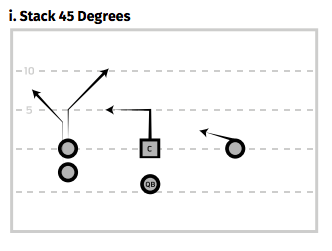 When it comes to scheming unstoppable flag football plays, it all comes down to creativity and execution. Think about the different formations and how they spread the defense out. Then incorporate different route combinations to help scheme a receiver open. Remember, it’s always a good idea for your quarterback to have multiple options in the passing game. If the first read isn’t there, teach them how go through their progressions to find the open man. You can also teach them to move around in and out of the pocket to help gain time to throw the ball to the open man.

An example of how you can manipulate a play to your advantage is by first recognizing the defense. If you think your opponent is in a man to man formation, you know you can find a weak spot by targeting a fast receiver on a slow cornerback. By running a slant route to the inside or by throwing a deep ball on a go route you can take advantage of that defensive weakness in speed and hit your speedy receiver for potentially a big play downfield.

If you want to learn more about play calling and scheming your own kids flag football plays, check out USA Footballs Flag Football Playbook for some great ideas! But all in all, while running unstoppable plays for flag football can be a blast for you as a coach, you need to make sure your kids are still having fun! 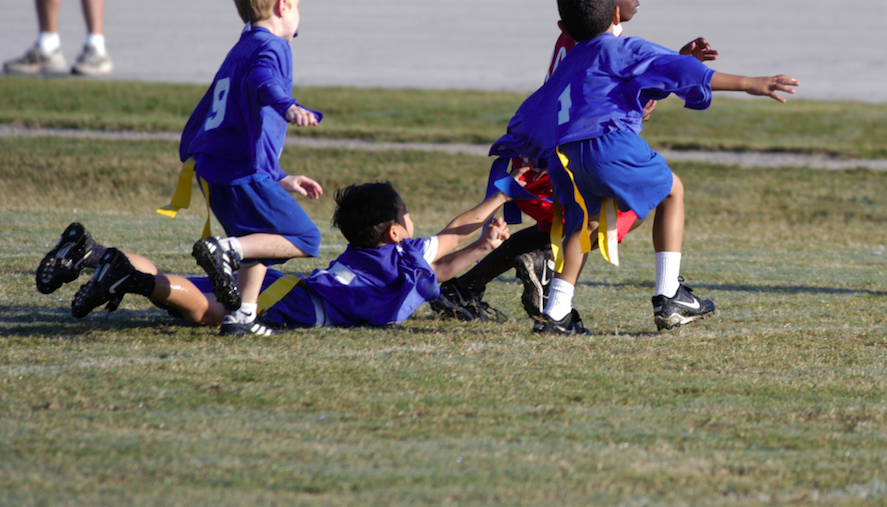 All in all, by teaching your team a few defensive plays that they know and understand well, you can ensure you won’t be giving up any easy points to your opponents.

The benefits of running a youth flag football program are sure to be plentiful. From teaching young athletes the proper way to play the game. To having a ton of fun playing against the competition, youth flag football is a great way to get your feet wet in the coaching realm.

By using our top tips on how to call the best youth flag football plays, you should be well on your way to a successful season as a program.

For more ideas on how you can successfully run a flag football program, check out another one of our blog posts!

Looking to Start Your Own Flag Football Leauge?

We have a few ideas to get you off to a great start. Learn more about how to start a flag football league on our blog!

Interested in setting up a new website for your sports program or simplifying your registration process? Send us a message at help@jerseywatch.com or try it out at www.jerseywatch.com.